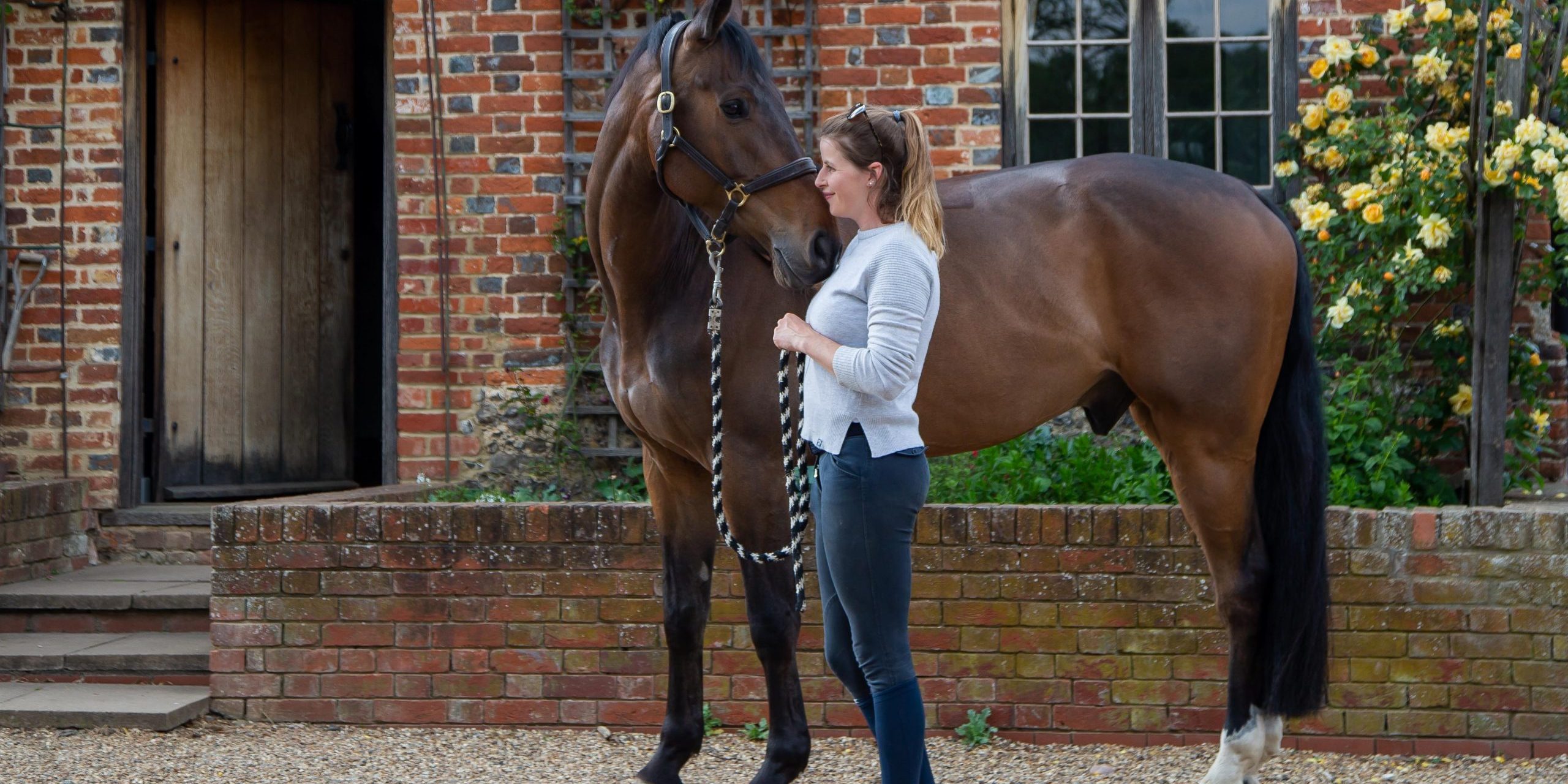 October has slipped away, notably ending with a lot of rain.  Puttenham Farm is at the end of a very long and gently sloping farm track which turns into a small river that courses its way down into our fields – so we are a teeny bit flooded.  Whilst we are trying to work out a land drainage system, we are doing so while trying to spend no money and do no heavy digging equipment – all under the command of a designer with zero experience, me! The small hummocks of earth we built up were immediately flattened by the tractor moving the muck trailer so further thought is needed – urgently!

Meanwhile, the showjumping gang are living in dry, indoor facilities having set off for their 5 weeklong Belgium Tour, lucky things.  Reality will hit hard when they return in early December to Puttenham’s outdoor school, outdoor horse walker and no indoor barn for stabling. 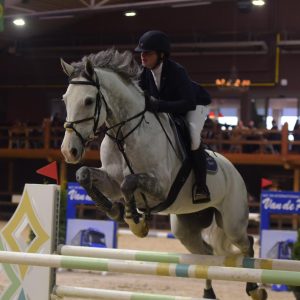 Weeks 1 and 2 of the Tour take Camilla and the horses to Lier and to Sentower.  Timmy (Cassini II) and Felix (Feliano B) both jumped well last weekend in their classes at Lier, having only had a single outing jumping indoors so far, Addington. (We mention that Felix jumped Camilla off at Addington at the 1st fence where he cleared the wings over a 1.20 oxer.  He did look a little surprised to see his jockey standing beside him).  Camilla is joined by Caitlin Whittaker, Helga Hufflepuff and Drizzle who is very happy to be included in the party.

Preparation for such a Tour is overwhelming and the lorry (fondly known as ‘Scarlett’) left with not an inch of space that did not contain provisions, not only for the horses but also for humans.  I’m thinking perhaps they don’t have supermarkets in Belgium?   However, the human shopping list seemed impressive, not a crisp or biscuit in sight – plenty of lettuce, hummus and fruit.  The week before they left saw the vet, the farrier and the physio visit the yard and the week after we had deliveries of shavings, feed and haylage to replenish our bare cupboards! In true bus fashion, the deliveries all arrived on the same day in the pouring rain, it was pretty much carnage with the shavings lorry wedged against the stables and the wall, wheels spinning and blocking in the haylage trailer.  I have a fetish about raking the gravel to look nice so after a 2-hour session of raking the churned up gravel I was horrified to see a large white van draw in across the immaculate yard to deliver a further 10 bags of forgotten quiet cubes from the previous delivery. 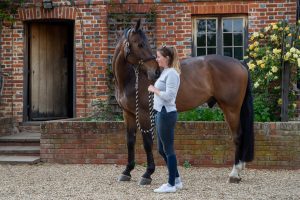 We’ve had quite a surprising case of red worm on the yard.  Our 6 year old Cambridge who had been improving week by week,  almost overnight became lethargic and sluggish and was losing condition.  We were taken a little off guard and to give him the benefit of the doubt called out the vet who took bloods which showed nothing.  We persevered and before testing for ulcers they tested for worms.  As we have a worming programme for the horses and Cambridge shares his field with one horse, a field is cleared virtually every day, we did not think that worms could be the problem.   However, we were told “no wonder the poor horse feels awful he is full of red worms”.  Chatting to the vet and sharing the experience we gather that red worm has been a real issue this year and can cause pretty dreadful problems.  Cambridge has been on a 5-day worming course and has perked up considerably.  Hopefully, he is well on the way to recovery with no lasting damage.  Camilla is a little nervous that his recent immaculate behaviour is now not due to growing up but to his worm problem!!! 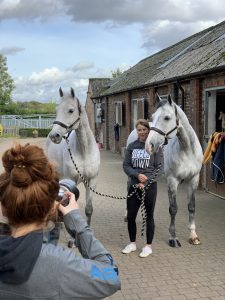 The future of the planet and what is happening to the environment is foremost in many peoples’ minds – along with Brexit.  We can make a difference with helping the environment even if we cannot control politics.  So we are thinking hard about what we can do at the yard and in our lives other than sorting out our refuse and recycling and will keep sharing our thoughts.  We are thrilled to be working with Honest Riders and look forward to being a part of this successful business as it grows within the equestrian market. 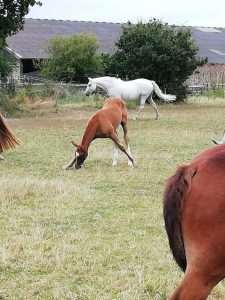 Possibly the biggest challenge to the yard has been naming this year’s breeding stock of 2.  Wembley’s filly was fairly quickly named but yet again we ran against a deadline for Billy Jingle’s filly foal.  Urgent text messages from Pippa saw Camilla still dithering on a name.  Last year’s foal became Ting a Ling and in keeping with this Christabel or Christingle were thrown into the mix. Thankfully Pippa took over and Christingle she is, by Christian 25 out of Jingle – quite fitting!!  So now we have Jingle and her produce Ting and Tingle!!

I end this piece with a tribute to our neighbour, Dermot Clancy who had a fatal accident on his tractor this month.    Dermot took up hunting later in his life.  He hunted in Oxfordshire, Leicestershire, Dorset and Ireland and was a familiar figure getting his amazing 17hh grey hunters fit around the lanes in Penn.   We compared notes, us with our showjumpers he with his hunters and his racehorses that he had in training with Kim Bailey.  A terrible shock to the many many people whose lives were touched by this incredible personality and our thoughts are with his family.