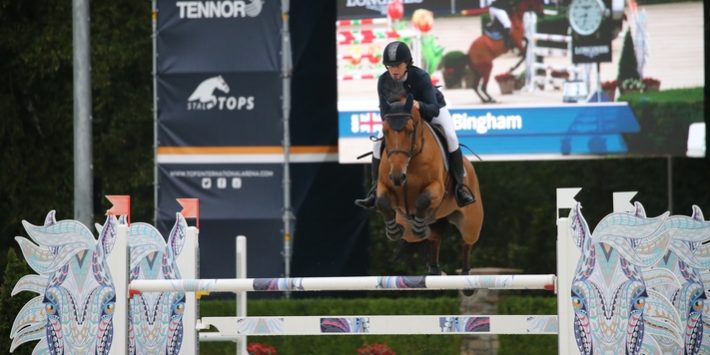 I was so excited to be back in beautiful Valkenswaard. Of all the wonderful shows I’ve been to, it is definitely my favourite. The atmosphere is friendly but everything runs super efficiently. The stables are big and permanent. The wash bays have hot and cold running water (luxury!). It’s also surprisingly easy to get to, just a short drive from the ferry – although we did struggle a little with the covid affected ferry timetable, which saw us waiting for a ferry for 3 hours on the way over.  Once you arrive at Tops International Arena, though – you just drive on in with a smile and a wave and few bits of paperwork. You can pull up out the front of your stable to unload horses and gear, which makes everything seamless.

Tim was great on day one but we had a streak of naughtiness on day two – he decided to stop for a little extra peek at the water tray, which resulted in me ending up on the ground next to him. A graceful dismount… but not by choice! On day 3 he redeemed himself and was amazing with just one unlucky pole. Paris was exceptional, clear on the first two days and just having the two down in the final on day 3 in our first 2* 135 GP together. Felix  was a different story – it looks as though he may have hurt himself on the first evening, either by having a funny roll or an awkward buck – tweaking himself in the process. He just wasn’t himself under saddle on the first weekend. We kept him quiet, treated him and did a little bit of jumping at a couple of local yards nearby Tops International Arena to see if we could get to the bottom of what he was feeling.

Staying in Valkenswaard and having time to explore in between competing is amazing. It is so beautiful, it is like a treat. You can use the amazing arenas to exercise and the outdoor spaces to hack –  I was bit nervous about the bicycles and their rights of way while I was hacking around! They hold a special, god like position in the Netherlands and you must not get in their way – horse or not, they’re coming through!

The second week of competing is a different atmosphere because it combines with the 5* competition. It’s like last week’s show, but to the power of 100. The time schedule is different – horses jump in the afternoon everyday instead of in the morning. We brought Felix back to the main competition but he just still wasn’t right and so, giving him the benefit of the doubt, we let him sit out the rest of the week out so that we could have him thoroughly checked over when we got home. I was gutted not to have the show I planned with him but as we get told, ad nauseum, that’s horses for you.

Paris and Tim were excellent however and Tim recovered from his aversion to water trays and jumped three really good rounds. On the last day, I really wanted to get through to the jump off of the final and we very nearly did bar one measly time fault. Paris had two top 20 placings in huge classes and jumping against 5* riders, which is an epic achievement for us as a pair.  Overall, it was an amazing show and the horses jumped their hearts out. So now I’m feeling really confident for whatever the rest of the year throws at me…..