Wembley having her first outing for 3 years September 2014 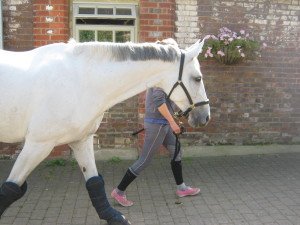 Having incurred an injury in 2011 when she was 8 she was put in foal to Cevin Z in summer 2012. Her colt foal was born 22nd July 2013 and early in 2014 she was brought back into work. Step by step she has been worked to fitness and she is now on her way to Di Lampard for a couple of weeks introduction back to jumping.

See more pictures and the rest of blog 24. Wembley having her first outing for 3 years September 2014 at www.wembleyiii.blogspot.co.uk/