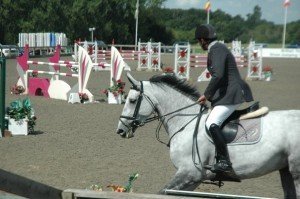 This year the Addington Manor Equestrian Centre are holding the Young Horse Championships on Friday 20th to Monday 23rd August. This will be Wembley’s 3rd year at the Show where she will compete in the 7 year old class. She was 3rd as a 5 year old sharing in the lucrative prize of not having a fence down during the entire competition and 2nd as a 6year old tipping the last fence and spoiling and otherwise unblemished competition. Zappa our 6 year old stallion by the same sire as Wembley, Concorde will compete in the non British bred 6 year old class.

See the rest of blog 2. Addington August 2009 at www.wembleyiii.blogspot.co.uk/