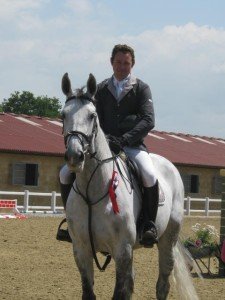 Wembley took 2nd place in one of the most coveted titles of the year the Foxhunter Championship at the Horse of the Year Show. Riders throughout Britain take their horses through the qualifying rounds during 2009 to earn themselves and their horses the ability to compete in the final qualifying competitions during the 2010 season to become one of the 24 horses out of many thousands to go forward for this prestigious event at HOYS.